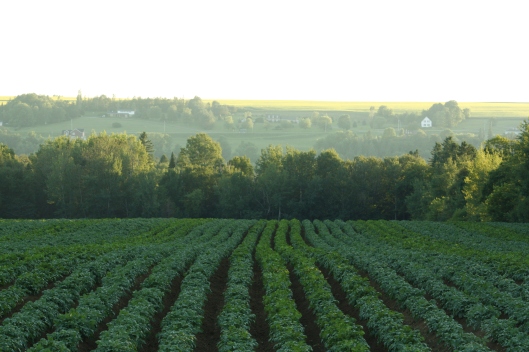 Nineteen and half years ago, we moved to Florenceville-Bristol. Twenty and half years ago we left Sainte-Anne-De-Bellevue, Quebec for Saint-Jacques, New Brunswick. Moving away meant leaving friends behind. Some we saw on occasions and some we lost contact with. The first few years were spent raising two beautiful children. Those years also meant reclusion and solitude as I saw our children going to pre-school, then school.

I thought I would lose my sanity. I thought I would never accomplish my dreams, and I had big ones believe me. Solitude meant a lot for the exuberant woman I was. It meant weaning myself from social events, which mainly took place in our small, but warm apartment where friends used to gather from Thursdays to Sundays around a good meal. There were the ups and downs that came with solitude. Words would not come easy when I had to use them with adults. I was perceived sometimes as snobbish while I was just struggling to learn how to talk again. There were new friends, new surroundings but I was still yearning for something meaningful to accomplish as if I was still waiting for my calling. Life is sometimes full of surprises. I woke up one day and looked at myself. You know those moments when you are facing a mirror and you start a conversation or should I say an imaginary one with your reflection. I used to do that when a child and I still have fun doing it from time to time. But, that day was like a wake up call that meant that I had to do something and break solitudes around me.

Little did I know that I’ve found myself gathering people and founding an association to help newcomers to the area settle. In few months, I found myself in a swirl delivering presentations and advocating for better welcoming communities. I worked as a supply teacher, volunteered, we raised our children and saw them grow and blossom.

If you ask me now if I had imagined myself living here, I would say no. But, if you ask me if this is where I want to live, I would say yes without hesitation. Home is what you make of it. This area made me discover my potential that I’ve certainly not used to the fullest. I had the chance to teach, to establish a great organization, to travel and promote the potato of New Brunswick. I met great people and two of them became my mentors. I’ve met great people who became close friends. I even started my own small company. Our children had the chance to live in a “safe” environment. They also had the chance to learn love and play music in a high school band with the best music teacher in the province.

Yes, our area is rural. Yes, I do miss the big city. Yes I have to drive to get food I crave for. But, I would never again live in a big city. I would never love the hassle of driving during traffic hours. I miss going to the movies, to the theater, but I buy DVDs and books instead. I travel more that I would have ever imagined. I love my quality of life and mainly I love what I’ve become in Carleton County, New Brunswick. And the best is yet to come!